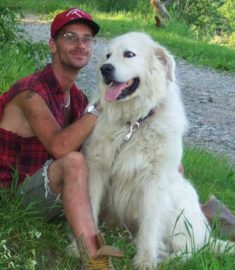 We got Beethoven after wolves came in the night and killed seven of my lambs and my favorite ewe. The children passing on the school bus were crying to see the lambs lying dead and injured in the pasture.

We put a large doghouse on a high point in the field. The next morning, I looked outside to see our remaining lambs missing. I was worried but looked and saw them all cuddled around Beto in the doghouse. They stayed with him more than with their own mothers.

One night I was awakened by a pack of wolves howling on the hill behind the pasture. As I came outside, I could see Beto at the back fence, facing the threat, woofing every few seconds. The sheep were huddled, terrified at opposite end of the field. The wolves could have taken Beto down, but they stayed where they were and disbursed when daylight came. We never again lost a single animal to predators after he arrived.

Beto was always happy, loved everybody. He enchanted strangers by rubbing his cheek against them. He died with his happy loving smile. He was a king amongst dogs, a true gentleman, sorely missed.