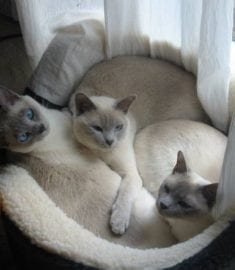 Quite a while ago I had a cat who was a mix of a Siamese and a Burmese. Newton was affectionate, intelligent, mischievous, and playful. I learned that Tonkinese were descended from Siamese and Burmese, and so I knew that was what I was going to check first when Newton went to wait for me at the Rainbow Bridge. When the time came, I went to get two Tonkinese kittens whom I intended to name Calvin and Hobbes. There were nine available, and when the kennel door was opened, one immediately jumped out, sat in my lap, and started purring; thus Calvin was an easy first choice. One of the others was playfully pouncing on the rest, and he seemed a natural choice for Hobbes. I sat with them for a while to make sure I was happy with my choices, and just as I was getting ready to go, another jumped in my lap, looked up at me, and purred. I couldn’t just leave him behind, so I left with three instead of two and named the third one Kant. It turned out that Kant and Calvin were littermates.

The three of them were the best traveling cats I’ve ever had. Whether it was a trip to the vet or a long drive to visit my parents, as soon as the cat carrier came out, they all voluntarily went in it. They were pretty much inseparable. The photo “The Boys” I’ve attached of the three of them together is my favorite, but it was pretty typical. That’s Hobbes on the left, Calvin in the middle, and Kant on the right. Whenever I returned home from work, I’d find the three of them were snuggling together like this. When they saw me, Calvin would be the first to get up and greet me, and the other two would follow close behind.

Hobbes soon taught me how to play fetch. He’d drop a cat toy at my feet, wait for me to throw it, and then run to get it and drop it at my feet again. He also learned that he could jump from the floor to perch himself on my shoulder, initially using his claws to catch ahold, but eventually learning to balance himself without his claws (presumably in response to my yelps of discomfort when he dug his claws in). Calvin learned leaping from him, and eventually figured that he could jump up to the top of open doors as well (see attached picture). Each of them enjoyed what I called “the Daddy train”—sitting on my shoulder while I went about my business in the house.

Initially, Kant was the dominant of the three, but at some point Calvin decided he wanted to be top cat. Hobbes was always meekest, and yet the most adventurous and the first to make contact when any other animal came to visit. He was also the best mouser. All three of them were exceptionally playful. Even in his older years, Calvin would chase the sheets whenever I was changing them.

Almost four years ago Hobbes had a seizure shortly after we left for a trip to a conference. My stepson lived with us at the time and immediately took Hobbes to the local vet, and eventually to an emergency vet hospital. Unfortunately, Hobbes didn’t recover, and during the next few hours I decided I wanted to try to have them cloned and called Viagen to get instructions. Unfortunately, due to the distance and the fact Hobbes was in a large vet hospital, I couldn’t communicate that I wanted to try to harvest the cells until after they had frozen the body. We harvested them, anyway, just in case, and I hope that at some point you will be able to clone pets whose cells were harvested under those conditions. At the same time, we decided to harvest Calvin’s and Kant’s cells while they were still healthy.

Calvin succumbed to complications from kidney disease a month ago, two weeks before his 17th birthday. I know you are not supposed to have favorites, but Calvin was not just my favorite of the three, but my favorite cat ever. This last month has been quite difficult, but one thing that has made it a bit easier is the knowledge that I will eventually be able to share life with his twin, too. I know twins (and especially twins that grow up under different conditions) are different and so when the time comes I will not be getting Calvin (and Kant and, I hope, Hobbes) back again, but I am sure there will be much that is similar and am looking forward to enjoying the parallels and the differences.

Kant is doing reasonably well. I know he misses Calvin—he has taken to something new, namely spending a lot of time sitting at the top of the stairs, hoping, I think, that Calvin will be coming up them. We’ve been able to spend a lot of time together as well.

I just want to be able to enjoy life with my three boys all over again.