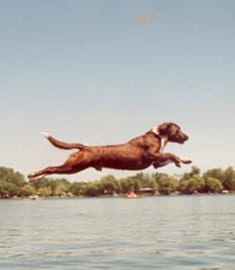 Nostradamos “Nozzer” was a mystical being. In February of 1987 my brother Chuck perused dogs in their locked storm fence cages inside the Minneapolis pound. He spotted a litter of pups, one in particular standing –up against the cage excitedly barking as if shouting “take me!” Chuck instantly recognized it was special as he crouched marveling at the pup. Realizing he should look at others before making a decision he turned and continued on. To his astonishment at his feet was the excited pup that made an impossible escape. Nozzer had human level intelligence, obsessed with fetching, incredible athletic ability, wining multiple talent contests, and my running buddy. A Frisbee fanatic, with legendary feats of fetching: diving 12’ underwater for sunken balls, vaulting 10’ up a tree to grab sticks, retrieving pheasants a mile away through impenetrable cattails. He also had a temper, throwing his dish and clubbing me with it when he didn’t get his preferred meal. A rift in the Universe opened as he lay dying in a coma, a gas explosion leveled our mother’s childhood, now rental home 4 blocks away. Following my running buddy’s funeral, I glanced at my flawless Timex Ironman watch. It had stopped.