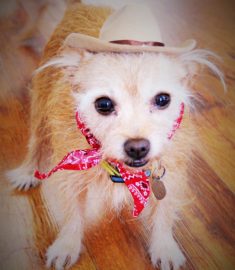 If you’re truly blessed, there are moments in one’s life where an experience touches you and affects you for the rest of your days.  It doesn’t have to be a verbal exchange, it can be a touch, a look, a moment of silence that screams a truth that needs no words.  It was eleven years ago that we had such a moment while walking through – of all things – a flea market in Texas.
We are animal lovers and since we never had children, the furry members of our family are our “kids”.  Some of them drive you crazy, some are the perfect little angels and then there are those in between – much like kids, they all have very distinct personalities.
While walking through the flea market, where all the puppies, kittens and other assorted animals were for sale and hoping for adoption, we came across a cage with two little Yorkie puppies in it.  It was late in the day, all the picks of the litters had been taken and these two little snots were there, resigned to the fact that they weren’t going home with anyone.  The last thing we needed was another pet as we had a menagerie of animals at home already, so we admired them and walked on.  As we made our way through the booths and the crowd, I couldn’t help but think back to the two pups in that cage, their future uncertain and how sad they looked.  It seemed they knew they weren’t wanted like their brothers and sisters had been.  I don’t care who you are, that is a sad situation, as they might be sent off to a shelter on the slim chance they might be adopted, or… be victims of euthanasia.
As we made our way toward our car to leave, we decided to go the long way around and look one more time at those ‘lil pups.  I can’t explain why, but I followed my heart.  They were still there, one lying asleep and the other sat up and looked at us in a way I can’t put into words.  As crazy as it sounds, it was a non-verbal plea to save her.  It was Her eyes…. She gave us a giant sigh, flopped down in the cage and stared at us with those pleading eyes as if she’d just given up.  It was in that moment I knew that she was meant to come home with us.  We gladly paid for her and off we went.
The  minute we got in the car, she was scared and nervous and threw up on me.  The look she gave me at that moment was the closest thing to an unspoken apology I could ever imagine, and to the end when she did something wrong, she used that same look to convey remorse and, of course, it worked every time.  She was full of character – and was a character – she howled and smiled when you came home, howled to music – her favorite song was ‘Werewolves Of London’, never met a person she didn’t love, was obsessed with outfits, dolls & lip gloss, had mastered the art of the ffft ffft, loved to unwrap her own birthday and Christmas presents, was my wife’s service dog and absolutely loved to travel, but had an inconvenient habit of pooping in airports (usually in front of the US Airways  desk) and is the only female dog I’ve ever known who humped your leg. Yeah, I don’t get that last one either, but we wouldn’t trade it for the world.
Pickles, as you were graying and slowing down with age, you sadly left us unexpectedly.  Thank you for being the best furry friend we could ever have, the perfect companion and our fur baby.  Eleven years…where did they go?  We would give anything to turn back time and do it all over again.