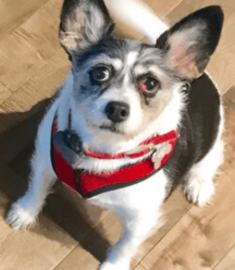 I adopted Ruby 7 years ago when I found her with an rescue group. She had been found wandering all alone on a highway in Alabama, and had been abused. However, I immediately fell in love with her.

When I brought Ruby home, she was incredibly timid, often cowering and having accidents, even when I just motioned to pet her. She also had food aggression and wouldn’t let my other dog Yogi eat his own food – I think because she didn’t know when her next meal would be. She wouldn’t come when called because she was afraid of being hit. She didn’t even feel comfortable being kissed or cuddled – I suspect because she had never been kissed or cuddled before.

So day, after day, year after year, I bent down to pet her, held her and kissed her, soothed her and sang to her, and literally, after years and years, now she happily comes when called, has allowed herself to fall asleep in my arms, never cowers, and mostly lets her “brother” Yogi eat his own food 🙂 I think she finally feels safe.

When people hear about Ruby’s journey, they say that I rescued her. But I know that it is she who has rescued me. Loving a rescue is a love like no other. The one thing that always made me sad is that I never got to experience Ruby as a puppy. However, now that I have genetically preserved Ruby’s DNA, I am hopeful to know that I may still get to experience that at some point in the future. I am a better person for having Ruby in my life, and for being allowed to love her.

Thank you ViaGen Pets for the possibility of a future with Ruby’s clone puppies. I am very grateful.
Appreciatively,
Lisa