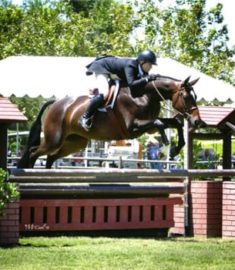 Sunday August 24th, 2014 my world was rocked forever and I lost one of my best friends, my horse Toronto. Toronto was an 8-year-old mare and she was amazing. She was tough, like most good mares can be- but when she was good, she was unbeatable! That Sunday morning, for some reason she jumped out of her paddock. We still to this day have no idea why. She managed to cut her hind legs, nothing life threatening but some significant cuts and scrapes that required stitches. The vet arrived to the barn a short time later to attend to her wounds. He attempted to tranquilize her and sew up a few places, but even under sedation she was still not having any of it. The decision was made to send her to the clinic so they could put her under anesthesia and attend to her wounds properly without incident.

The procedure went well, however when she attempted to get up after the anesthesia, she struggled. Forty-five minutes later, she gave it one last try and while doing so, she broke her hind leg. The clinic immediately called me with the new and the decision was made to put her down. My heart was forever broken.

Toronto was an amazing mare, so talented, my daughter loved her and she was so incredibly gentle with her. In my sadness the next day, I somehow got the idea of cloning her. During my search online I came across ViaGen Equine. I spoke Melain Rodriguez who was so amazing and thoughtful during our conversation as I was still pretty upset each time we spoke. I was able to collect a sample of my mare (her ears actually) and sent them via FedEx to the lab. Then we waited….6 weeks to see if the sample would be sufficient for our needs.

Weeks later I was informed that the lab was able to culture approximately 6.6 million viable cells and they are now preserved in 12 vials. I have not yet taken the next step the complete the cloning process but because of ViaGen Equine I have the option to do so when I’m ready and I have the potential of Toronto back again! I’m so happy that I found ViaGen Equine and one day, she will be in the show ring again, maybe for my daughter!