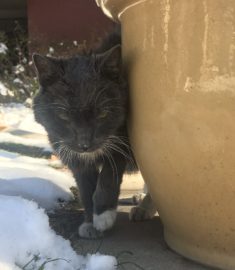 I had decided to get a cat from the local shelter after I settled in Utah in 2000. I went back to the shelter three days in a row with my eye on a beautiful 6 month old grey and white tuxedo pattern short hair. After the third visit I adopted him and Mr. Kitty soon became my best friend. I always like cats that are dog like in their Personality and Mr. Kitty was no disappointment! He loved people, always coming out to socialize whenever I had company.

Mr. Kitty was very talkative and purred whenever he was petted. I moved around quite a bit while living in Salt Lake and each time I found a new home Mr. Kitty’s personality shifted in a entertaining and fascinating way. He was always playful, loved catnip and toys and was a joy and comfort to me for 19 years. At about age 16 I noticed Mr. Kitty was beginning to show signs of age due to arthritis and cognitive decline. Around that time he stop using his litter box, but developed a habit of doing his business outside when I took him for walks. He would always walk right behind me, following me wherever I went. I had to learn to be very creative in feeding him and making sure he got all of the fluids he needed to remain healthy. The last three years of his life were some of the most intimate and rewarding of my life spent with him. He slept right next to my head every night, waking me up sometimes at 4 AM to take him for a walk to relieve himself. I would regularly have a vet tech come over to give him an exam and I learned how to give Mr. Kitty an IV of fluids. Even though his health was declining he was well looked after and loved.

The thought of losing him was devastating to me and that is when I found an article on Viagen Pets. The ability to preserve his DNA and possibly clone him which is my intent became a great comfort to me in dealing with the fact that he would soon be gone. I have had numerous cats come and go in my life, and I love them all, but Mr. Kitty was very special to Me in so many ways. He has only been gone a short time and I miss him greatly. Knowing that Viagen Pets is keeping a part of him alive gives me hope that I will be reunited with my best friend sometime soon. I would recommend to anyone who has a pet that they love so much, the thought of being without them is unbearable contact Viagen Pets and consider genetic preservation.

The folks at Viagen Pets have been so patient with me, as Mr. Kitty continued to persevere a year after I originally contacted them and had them send me a preservation kit.… His will to live and love was amazing all the way until the very end. Hopefully, thanks to Viagen Pets I will have a new beginning with my best friend. I so look forward to that day, where I get to reunite with Mr. Kitty’s Genetic relative as a kitten! In the meantime I will find comfort in knowing that he is still alive thanks to genetic preservation.